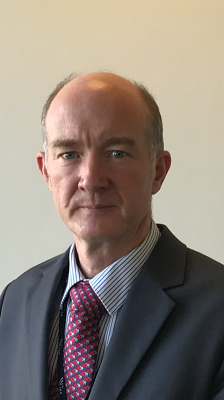 Peter Nolan has been working in the Irish Aviation Authority since 1994, and was previously the Head of ATM Systems and Technology. He has an engineering background and has worked as an FDP specialist on the CAIRDE2000 program, the IAA’s forerunner to the COOPANS program. He’s married has two children, enjoys cycling, running and is a rugby fanatic.

You will be taking over the Chair of the system realisation management group. That sounds important, especially when talking about an ATM system! What are your main tasks?

Firstly I am delighted to have the opportunity to take over this exciting role.

My role is to act as the independent chairman of the COOPANS System Realisation Management Group( SRM). The SRM maintains oversight of the COOPANS development process from the ANSP perspective. All COOPANS Builds follow a similar development process, where operational requirements are established and merged into a software build. The Build is contracted and  it takes approximately two years from Contract Signature to O-Date. During that two year period the software is subject to an intensive development and validation process. In COOPANS we  have a group of dedicated engineers and ATC experts who are actively involved in the development and validation process and work to ensure the key milestones are delivered. At any given time, there are a number of software builds at various stages of the development process, and the SRM works to ensure that the overall process runs as smoothly as possible.

One of your main tasks is to report to the Alliance Board….

As the SRM Chairman, I act as a link with the COOPANS Alliance Board of CEO’s to ensure the strategic objectives they have identified are delivered in successive COOPANS builds and I report to them on progress and developments. As the role of the SRM Chairman is currently the only dedicated role in the COOPANS Organisation and I view it as an opportunity to promote the COOPANS brand to a wider international audience.

What are the next major milestones in COOPANS – when can we expect the next releases and what will the most significant improvements or changes be?

In the short term our next major milestone will be the introduction of the COOPANS B3.3/B3.4 software release that is planned for May 2018. The benefits of B3.3 are mainly technical, it is based on an new operating system and is the first step in the planned COOPANS hardware migration scheduled for the winter of 2017/18. The current COOPANS hardware has been in service since 2011 and in IT terms it is now considered obsolete. B3.4 will introduce an enhanced Arrivals Manager (MAESTRO) which will facilitate the further integration of the arrivals management function with neighbouring ATM systems, through improved information sharing and data exchange.

What are the most significant longterm milestones?

In the Longer term like all other ANSP’s COOPANS is required to implement the European Interoperability Mandates and to implement the Pilot Common Projects. A road map of progressive software deliveries is already planned to meet these requirements on an ongoing basis. A roadmap to 2025 and beyond has been established which will see that COOPANS remains fully aligned with all mandates and will meet the Flight Object requirements (the future of  flight plans) for 2025.

If you take a look into your crystal ball - what lies ahead for COOPANS and what will the next major challenges be?

Like any Irish man I will answer that with a story. At a recent event to promote a wider awareness of the COOPANS in Zagreb, I met with Hervé Multon, one of the founding fathers of COOPANS on the Thales side. He posed the question

“ Considering how far we have come in the last 11 years as COOPANS , where can COOPANS be in ten years time. “

Like everyone associated with COOPANS I am committed to ensuring that COOPANS remains a leader in the delivery of ATM services and we continue to expand our influence at a European and Global level. Key to delivering on these challenges will be our ability to adapt and be flexible in an environment where the lines between customer and supplier, service provider and service user are continually blurring.