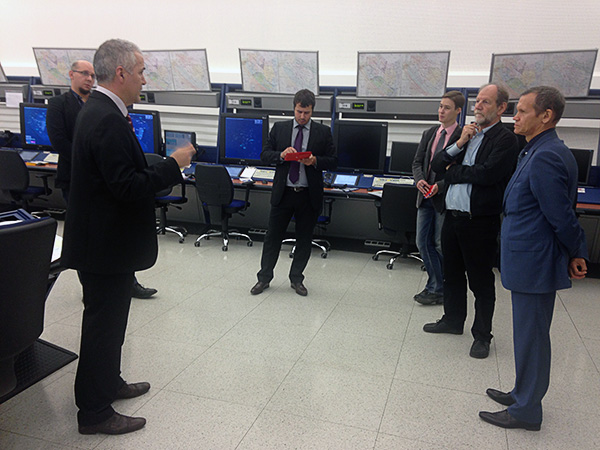 Date:
02-12-2015
Short content:
A delegation of the European Parliament's Transport and Tourism Committee (TRAN) visited Croatia Control Ltd (CCL) on November 3, 2015 on the occasion of their 3-day visit to Croatia.
Long content:

The members of the delegation, led by the Chair of the Committee Michael Cramer, were Deirdre Clune from Ireland, Dominique Riquet and Karima Deli from France, and Davor Škrlec from Croatia.

CCL’s Director General, Mr. Dragan Bilać, presented the COOPANS system, simulator and other activities performed by Croatia Control at the EU level. The delegation was particularly interested in the implementation of cooperation within the framework of the Functional Airspace Block Central Europe (FAB CE), as well as cooperation among the air navigation service providers (ANSP) from Austria, Croatia, Sweden, Denmark and Ireland via the COOPANS partnership, in view of the fact that those ANSPs are geographically separated.

COOPANS is an excellent and unique example in Europe of a long-term partnership where 5 ANSPs have a completely harmonized ATM system which is one of the most state-of-the-art and safest systems of this type, by means of which they fulfilled the preconditions for the achievement of Single European Sky goals, stressed Mr Bilać. This information was also confirmed and supported by TRAN member Deirdre Clune from Ireland, who had already been familiarized with the COOPANS activities through her contacts with IAA, the Irish ANSP.

After the presentation, the EP delegation visited the simulator, which is identical to the operational system. They also visited the Area Control Centre, and expressed their satisfaction for being able to see the state-of-the-art ATM equipment, as well as the Croatian ATCOs at work.

As a part of their regular activities when visiting a particular member state, the EP members and representatives avail themselves of an opportunity to familiarise with the current challenges and projects contributing to a greater territorial cohesion, fulfilment of European strategies and goals, and thus to equal development of all regions in Europe.

The Transport and Tourism Committee is responsible for the matters relevant to the development of a common policy for rail, road, inland waterway, maritime and air transport, and the interest expressed for the visit of Croatia relates to the projects in the aforementioned sectors.

For media queries (on behalf of the COOPANS partners), please contact: